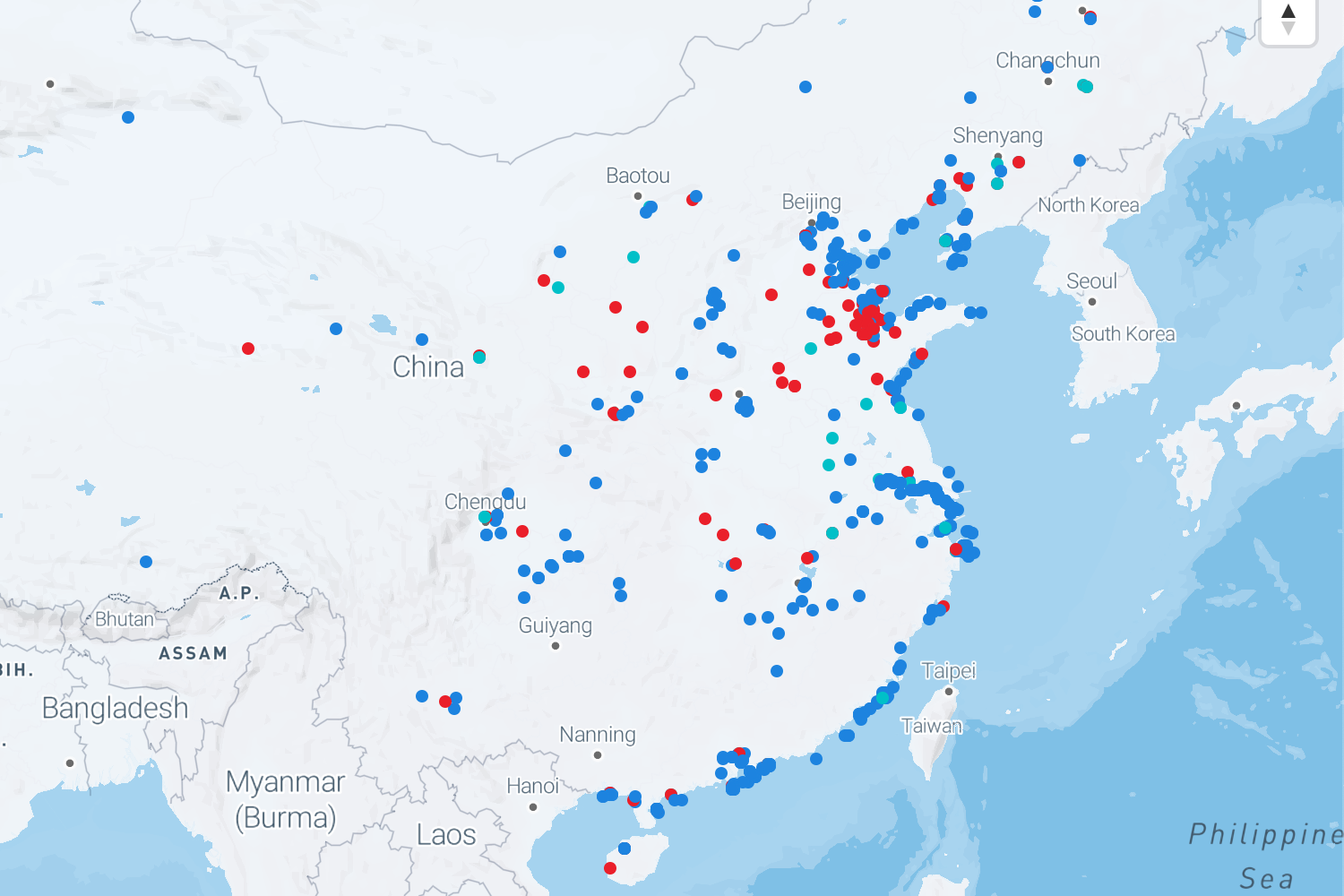 China has long relied on the Middle East to secure much of the oil needed to fuel its rapid economic development. Now Chinese President Xi Jinping wishes to create an “ecological civilization” that relies less on fossil fuels and more on renewable energy.

As the world’s largest oil importer seeks to become greener and more self-reliant, one might expect a shift in its attention and capital. The reality, however, is not that simple.

Since China became a net importer of oil in 1993, the Middle East has emerged as an increasingly important source of this critical commodity. By the time China surpassed the US as the largest importer of crude oil in 2017, almost half its supply originated from this troubled region.

Despite China’s years-long efforts to ramp up local production and diversify its acquisition, its dependency on the Middle East for crude oil remains intact. In 2020, China imported crude oil that totaled roughly US$176 billion. Almost half (47%) of these official imports came from Middle Eastern countries.

Notably, Saudi Arabia emerged as China’s largest crude oil supplier and was still maintaining its leading position as of October 2021. The $28.1 billion worth of oil exported from the Kingdom to China in 2020 accounted for 15.9% of China’s total crude oil imports.

China’s thirst for Middle Eastern oil is perhaps best exemplified by the case of Iran. During 2020 and into early 2021, Iran had reportedly exported almost 17.8 million tonnes (306,000 barrels per day) of crude oil to China in the face of US sanctions on the Islamic Republic.

Besides oil, the Middle East also provides another vital resource to China – natural gas. As one of the world’s largest exporters of Liquefied Natural Gas (LNG), Qatar records the second-highest export volume of 106.1 billion cubic meters in 2020.

That year, China received 8 million metric tonnes of LNG from Qatar, accounting for 20% of its total LNG imports. With China’s demand for gas set to remain relatively strong over the next several years, Qatar continues to be part of this important equation.

China’s dependence on the Middle East for oil and gas has elevated the region’s strategic significance to Beijing. China has accordingly sought to expand cooperation beyond the energy sector from maritime and railway infrastructure projects within the framework of its Belt and Road Initiative to investments in advanced technologies such as 5G networks, artificial intelligence and nuclear energy.

According to the American Enterprise Institute’s China Global Investment Tracker, more than $123 billion flowed from China into BRI-related investments across the region between 2013 and 2019. The resulting economic entanglement has created an interdependence that has established China as a major player in the region.

Geopolitical instability in the Middle East remains a significant energy security concern for Beijing. The attack on Saudi Aramco’s oil facilities by Houthi insurgents in September 2019, which caused oil prices to surge 15%, serves but one telling example.

That crude oil and LNG traveling from the Middle East to China moves through some of the most unstable regions of the world, only compounds the challenge for Beijing.

Tankers leaving the Middle East and North Africa first transit the Strait of Hormuz or Bab el-Mandeb strait, two maritime chokepoints that straddle regions fraught with conflict. From there, they move south past the port of Gwadar in Pakistan’s troubled Balochistan province and towards Myanmar, where one of the longest-running civil wars is threatening China’s $1.5 billion natural gas and oil pipeline links to the Indian ocean.

To secure these waterways and ensure the steady flow of energy to the mainland, China deployed its first modern battle-ready warships to the region as part of a naval task force to conduct escorts and patrols in the pirate-infested Gulf of Aden in 2008.

While pirate activity has primarily shifted to other regions – like the Gulf of Guinea – since 2012, the People’s Liberation Army Navy (PLAN) remains active in the Gulf of Aden. This has led some pundits to raise questions about China’s intentions.

A 2016 report by the French Institute For International Relations posits that China’s anti-piracy missions “have evolved from protecting Chinese shipping interest” into a “strategic forward deployment, contributing to the rise of Chinese sea power in the Indian Ocean.”

The authors’ assessment seems congruent with China’s 2015 military strategy, which states “the security of overseas interests concerning energy and resources, strategic sea lines of communication, as well as institutions, personnel and assets abroad, has become an imminent issue.”

Beijing has sought to bolster the capacity of its deployment of military assets by establishing forward operating bases – such as the opening of the first Chinese overseas naval base in Djibouti in 2017.

Notably, on December 14 at the Sixth Annual Conference on Israel’s China Policy, Israel’s former Mossad Chief Efraim Halevy pointed out that China had recently constructed a pier large enough to accommodate an aircraft carrier at the naval base in the eastern African nation.

More recently, an attempt by China to construct a secret military facility in Abu Dhabi’s Khalifa port that was halted due to US pressure serves as another example of China’s determination to enhance its power projection capabilities in the region.

While the true intent of the project remains unclear at present, China’s development of commercial ports in outposts around the world has been described by US officials as a “clear effort to develop footholds for military access.”

From the Chinese perspective, Beijing needs this power. Besides threats stemming from piracy and political instability along its energy supply chain, the narrow straits through which most of China’s oil and gas transits pose another geopolitical conundrum for Beijing: the US Navy and its allies could interdict shipments of energy supplies and hence threaten China’s energy security.

Considering China’s dependence on foreign suppliers for oil remains in excess of 70%, Chinese fears of such disruptions to the energy supply chain will only grow.

While many analysts have called into question the viability and sustainability of executing such a blockade, there is no doubt that the possibility occupies an important place in Chinese strategic thinking.

As Richard Ghiasy, Fei Su, and Lora Saalman explain in a 2018 report on the 21st Century Maritime Silk Road, “the CPC mindset [is] to prepare for the worst and to alleviate sources of vulnerability, rather than hope for the best.”

Evidence of this can be found in China’s efforts to develop the China-Myanmar oil and gas pipelines that run from Kyaukpyu port to Kunming, the China-Central Asia pipeline, and its plans to construct a China-Pakistan-Iran-Turkey (CPIT) energy corridor – to transport oil and natural gas primarily from Iran overland through Pakistan to China.

These projects are all designed to reduce the country’s heavy reliance on critical maritime chokepoints, through which roughly 83% of China’s oil imports transit.

In addition to the construction of new overland routes, China has developed a significant strategic reserve of oil, which according to the Oxford Energy Institute, is “estimated to contain 40 days’ supply.”

Meanwhile, Chinese national oil companies – CNPC, CNOOC and Sinopec – are planning to boost spending and are expected to drill 118,000 wells over the next five years at a projected cost of $123 billion. However, considering that only 2.4% of global proven oil reserves are located in China, the scope for increasing domestic production remains limited.

China’s 14th five-year plan, the blueprint that will guide China’s development through 2025, places a significant emphasis on energy security and climate change. The Five-Year Plan commits the government in very broad terms to “formulate an action plan for peaking carbon emissions before 2030” and to “anchor efforts to achieve carbon neutrality by 2060.”

The world’s second-largest economy had already embraced green energy production prior to this plan, including wind, solar, hydro and nuclear, as well as the electrification of the energy and transportation systems.

China has come to dominate many of the vital global renewable energy supply chains of the 21st century and is the biggest producer of batteries, electric vehicles, solar panels, power control systems and wind turbines.

China today controls roughly 60% of the solar market and has maintained its position as the top investor in renewable energy for 10 years in a row. In 2019 alone, China invested a staggering $83.4 billion in the clean energy sector.    Investment in clean energy globally in 2019, by select country (in billion US dollars)

Over the last decade, China added 36% of the world’s total new renewable generation capacity. By 2060 China aims to transform its power generation mix from roughly 70% from fossil fuels today to 90% from renewable sources.

As international energy expert Edward C Chow explains: “China does this partly but not solely because it recognizes its overdependence on oil and gas imports and the security vulnerability this causes.”

Not so fast; and not so simple

However, the transition towards a greener, more sustainable world will take time and is likely to be both a messy and costly process. According to Zang Xiaohui, dean of economics at Tsinghua University’s PBC School of Finance, China will need to invest as much as $46.6 trillion by 2060 to meet this goal.

Deputy Secretary-General of the National Development and Reform Commission, Su Wei, has emphasized that despite the country’s ambitious plans to go green, economic growth remains a top priority.

Considering the stability that traditional power sources have provided China’s industrialization efforts compared to the “intermittent and unstable” renewable sources, Su Wei points out that China has little choice but to rely on energy sources such as oil, gas and coal power while “transiting.”

The power cuts and blackouts that recently rippled across China, causing factories to slow production or close entirely, illustrated the extent to which the country relies on non-renewable sources to maintain economic growth.

Despite its ideals to transit towards green and clean energy, China’s dependence on oil and gas imports is projected to grow to 80% by 2030. According to a parametric review of data from the US Energy Information Administration (EIA) by Emeritus Chair in Strategy at Center for Strategic and International Studies Anthony H Cordesman: “China and Asia will have a sharply growing dependence on MENA and Gulf petroleum exports that may well extend through 2050.”

Cordesman points out that “China will depend – as will the rest of Asia – on energy exporters like Algeria, Libya, Egypt and Syria, as well as the states of the Arab/Persian Gulf – Bahrain, Kuwait, Oman, Qatar, Saudi Arabia, the UAE, and Yemen.”

Against the backdrop of escalating tensions between China and the US, such reliance only lends further impetus for China to expand its influence and secure its interests in the region.

Through 2060, China will need to protect the sea lines of communication to ensure the integrity of its oil and gas supply chains. This reality increases the possibility that Beijing will seek to establish more military outposts to enhance its naval power projection capabilities.

Meanwhile, Middle Eastern countries are not standing by idly as the world transitions to a greener future and are increasingly looking to Beijing to assist them in constructing their very own clean energy ecosystems.

As these ecosystems mature and the world begins to rely less on the region’s oil, Beijing’s dominance of the renewable energy supply chain promises to turn the geopolitical status quo on its head and may leave the Middle East uncomfortably dependent on China in the green economy.